According to forecasts by the Association of Internet Trade Companies (AITC), e-commerce sales in 2016 could have reached 900 billion rubles.

The volume of the Russian e-commerce market grew by 26% in the first half of this year and amounted to 405 billion rubles. According to forecasts by the Association of Internet Trade Companies (AITC), online sales could reach 900 billion rubles in 2016.

According to AITC and J’son & Partners, the cross-border volume by 37% – to 143.1 billion has increased from January to June. Experts estimate that cross-border e-commerce in 2016 could rise to 320 billion rubles, while the number of parcels from foreign e-commerce stores could reach 230 million, up from 135 million in the previous year.

The cross-border volume for Russian e-commerce continues to grow. Analysts say it will rise to 35% in 2016. According to AITC and Russian Post, the volume of incoming international shipments with goods increased by 102%, while the number of domestic orders increased by only 5% in the first half of 2016. 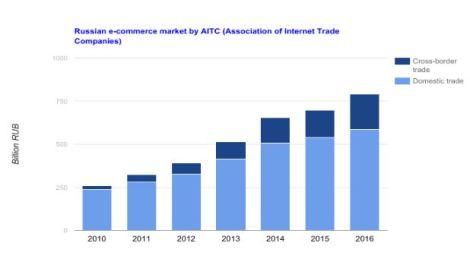 “In fact, Russian Post has become a strong alternative delivery channel for large commercial consignments to our country. This channel does not require the payment of cash on delivery or value added tax. Thus, the Russian retail market has no choice,” said Alexey Fedorov, President of AITC.

In the second quarter of this year, 37% of all online orders made by Russian users are delivered by Russian Post company. The company’s share decreased by 2%, in comparison to the first quarter. “In recent years, Russian Post has been steadily increasing its share in the goods shipment market. This is a good trend for us, especially because the growth of shipments volume does not increase the delivery time, but on the contrary, contributes to its reduction,” said Sergey Malyshev, Deputy General Director of Russian Post.

In terms of cross-border e-commerce orders, household appliances and electronics have the highest demand among Russians and represents 32% of overall volume. It is followed by clothing (23.8%), footwear (11.8%), cosmetics (7.5%) and auto parts (7.1%). Moscow residents (46%) use foreign online stores most often. St. Petersburg’s share was 11.6%, and other cities comprised 43%.

In financial terms, more than half of the cross-border market relates to China, 24% to Europe, and 12% to the United States. As for the number of commodity items, China’s 90% share far exceeds the other countries’.

“Gaps in regulation, which is not keeping up with rapid e-commerce development, resulted in the highest priority, that has been given to foreign players, who actively take advantage of tax-free trade and switch to non-trading turnover. If we don’t want to transfer all e-commerce to the offshore trade model in the near future, it is necessary to create equal conditions for doing business in which local online retailers can compete on equal terms with foreign players,” said Artem Sokolov, CEO of AITC.

According to AITC numbers, 64% of online orders from foreign e-commerce stores do not exceed € 22, while the share of expensive purchases over € 1,000 is 0.4%. The organization has repeatedly proposed reductions of the tax-free threshold to € 22 to settle online trade, and in June AITC stood for VAT introduction for foreign retailers.

However, experts at the National Association for Mail Order and Distance Selling Trade take the opposite view. According to their data for 2015, cross-border trade attracted more than 12 million new customers to the Russian e-commerce trade network, adding $144 million to this segment.

In addition, AITC examined the state of the household appliances and electronics market. Based on GfK data, AITC analytics forecast that the segment volume for 2016 will be about 210 billion rubles.

In the first six months of 2016, computers and laptops were the most popular items among buyers (28%), followed by large home appliances (24%), then smartphones and phones (22%). Sales of mobile devices showed the most active growth.

In terms of the growth rate of online sales, the South and the North Caucasus Federal Districts are leading (33.9%), while almost half of the market goes to the Central Federal District (47.7%), according to GfK data.